Chelsea continue their Premier League campaign against West Ham at the London Stadium tonight, looking to extend their unbeaten run to seven matches across all competitions. The Blues booked their spot in the FA Cup semi-finals with victory over Leicester last time out and have already beaten Manchester City and Aston Villa since English football returned.

Chelsea were on a four-match unbeaten streak before lockdown and have racked up three straight wins since the return of on-pitch action.

Frank Lampard’s men were not at their best against the Foxes on Sunday but still managed to earn their passage into the next round thanks to Ross Barkley’s second-half strike at the King Power Stadium.

Focus returns to the Premier League this week, with Chelsea aiming to strengthen their hold on a Champions League qualification spot.

The Blues are two points clear of Wolves with a game in hand, while they still boast a five-point lead on Manchester United but there are several injury concerns for Lampard to address ahead of the clash with the Hammers.

JUST IN: Sports quiz questions and answers: 15 questions for your virtual pub quiz 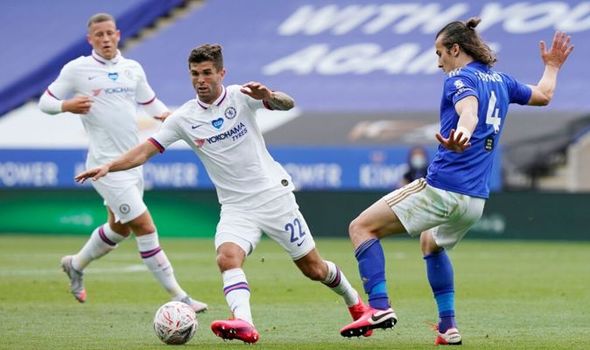 Pulisic has arguably been Chelsea’s best performer over the past three games, scoring twice as he looks to cement a starting berth ahead of the 2020/21 campaign.

However, his availability for the trip to West Ham has been in doubt after the American was seen with ice on his calf having been substituted against Leicester.

After the final whistle Lampard was confident it was not a big issue, saying: “Christian felt a tightness in his calf in the second drinks break, hopefully nothing that keeps him out.”

However, he was more reserved in his pre-match press conference on Tuesday and said: “We are managing him, but no answer yet.”

Christensen was a stand-out player in Chelsea’s victory over City, but subsequently suffered a hip injury that caused him to miss the clash with Leicester.

Lampard has confirmed the Dane is in the squad to face West Ham but is set to check his fitness prior to kick-off.

Speaking ahead of the clash with City, Lampard said: “Callum Hudson-Odoi is still searching for fitness. He’s fit but not match fit yet.” 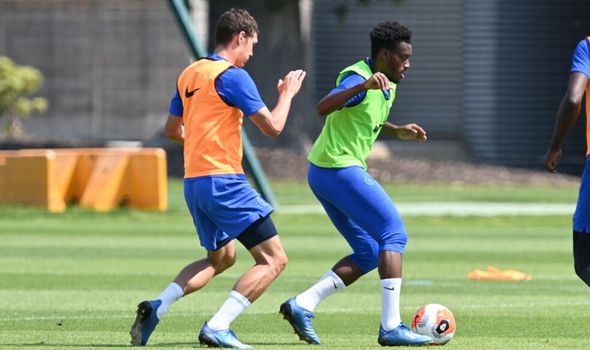 Tomori is closing in on a return to action with the young centre-back expected back in training this week.

The 22-year-old picked up a muscle problem which has seen him sidelined since the Premier League restart, and last week Lampard said: “Tomori is still probably about a week away from training properly with us.”

Van Ginkel has been sidelined for nearly two years with a serious knee injury but recently signed a 12-month contract extension at Stamford Bridge.

The Dutchman is steadily working his way back to full fitness and has been stepping up his recovery during the coronavirus lockdown.