Manchester United legend Gary Neville has issued a “word of caution” that his former side do not get carried away with their recent form. United extended their unbeaten run in all competitions to 15 matches with victory at Brighton on Tuesday. The win took the Red Devils back into fifth place and in strong contention for a Champions League qualification spot.

Neville admits there has been huge improvement in recent months under Ole Gunnar Solskjaer.

However, ahead of the trip to Brighton, the pundit pointed out far United are behind newly-crowned champions Liverpool.

“It’s a lot more likable team this one than was here two years ago where you just thought Manchester United’s recruitment policy had lost direction in the way in which they were approaching it,” Neville said on Sky Sports. 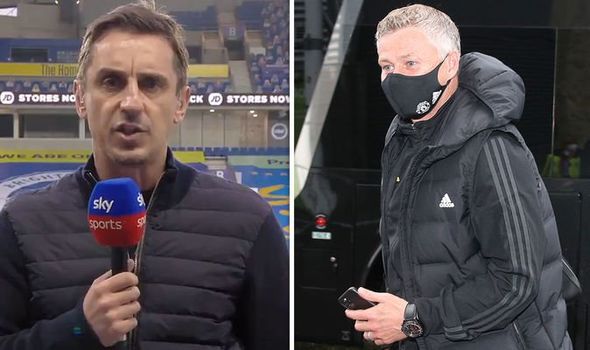 “What I would say is I would urge a word of caution.

“Manchester United are sixth in this league, they’ve got a squad that are definitely improving with young players that I think the fans like, but there’s still some work to do in the transfer market to get this team to a title-winning team, which has to be Manchester United’s ambition.

“So definitely a step in the right direction, some of the players are progressing year on year, month on month but there’s still more needed, a lot more needed.

“I think three or four players of high quality, of the Bruno Fernandes type, that they need to get to a point where they can start to challenge.”

“I think they need to make two or three signings, another good top-quality centre-half in there, adding to the strength in depth of the squad,” Smith said.

“But you look at that midfield now and the competition in there, I think [Nemanja] Matic sort of adds that balance to then allow [Paul] Pogba and [Bruno] Fernandes go forward, go and do what you want, go and make things happen, which they have been doing.

“It’s great to have [Marcus] Rashford back fit, Martial back scoring, so of course they’re going to be a team there or thereabouts.

“But I just think they need to add a couple, two or three more players if they’re going to be competing with the likes of Liverpool and Manchester City.”

This article contains affiliate links, which means we may receive a commission on any sales of products or services we write about. This article was written completely independently, see more details here